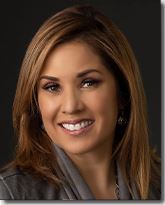 Victoria Martinez Muela was raised in the City of El Monte where she attended local public schools and is a graduate of Arroyo High School. She attended Pasadena City College and Cal State Los Angeles, having earned an Associate's Degree, then a Bachelor of Arts Degree in Social Science.

With a diverse resume, Victoria has a proven track record of leadership. She earned awards for excellence in a corporate setting with both Toyota and Starbucks Coffee Company. She spent time behind the scenes as a producer as well as in front of the microphone in radio. Currently, she is focusing her energy on bringing educational software to early childhood center classrooms statewide. In her spare time, you can find her spending time with her family, on the golf course, at Dodger stadium or volunteering in her community.

Prior to her work as a Councilwoman for the City of El Monte, she devoted her time to her favorite causes, charities serving women and children. As a Board Member for American Women in Radio and Television, she mentored future female broadcasters. Known as "Coach Vicky," she donated her time on the field coaching young girls at the El Monte Fillies Fastpitch Softball League where she grew up playing softball.

Continuing to serve, Victoria is an advocate for children and their families battling childhood cancer. As a volunteer with Padres Contra el Cancer at Children's Hospital Los Angeles for many years, she has worked to bring resources and awareness to the organization. She also became a friend to the Blood Donor Center at Children's Hospital encouraging friends to give blood, hosting blood drives and volunteering at special events.

Since being elected to the El Monte City Council, Victoria has served at Chairperson to two of El Monte's newest community events; The Back to School Resource fair, where thousands of children have been given free backpacks and other necessities to start off a productive school year; and INSPIRE - a Young Women's Leadership Day, a one day conference for high school girls where they learn about issues affecting their daily lives. This year, she co-chaired the male version of INSPIRE. Also, on behalf of the city, she spearheads an annual purse drive in honor of Domestic Violence Awareness Month.

Her family being a priority, Victoria is a devoted daughter, sister, and aunt to 17.